Bijou homes and apartments seem to be all the rage at the moment with people embracing cosy living in commuter friendly locations. The great news is that compact kitchens need not lose out on mod cons and storage space. All it takes is some intelligent small kitchen design work and a handful of clever innovations, of which there are now, thankfully, a growing variety. Here are a few of our favourites: 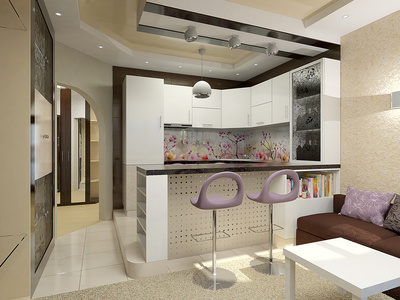 With clever design,compact kitchens need not lose out on mod cons and storage space.

Manufacturers have responded to a love of small space living with these clever sinks designed to fit neatly into kitchen corners.

Rather than taking up valuable wall space, hanging shelves from the ceiling is an intelligent way to create storage. There are some really trendy shelving units available designed specifically to be hung from ceilings and it’s fairly easy to blend them in with your kitchen units.

With a bit of shopping around you can find a range of well-designed, smaller-than-standard appliances that suit a small kitchen design, such as fridges that aren’t so deep, compact dishwashers as narrow as 45cm and combination ovens that take up far less space than your average cooker. 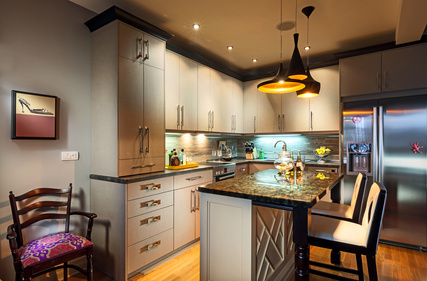 If you have a small kitchen that could do with a redesign, we’ve got plenty of ideas to make the most of the space.

As well as saving space there are also ways of creating the illusion of more space, and we’ll cover these in a future post. Meantime, if you have a small kitchen that could do with a redesign, we’ve got plenty of ideas to make the most of the space so get in touch for a chat.